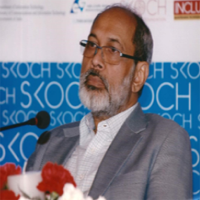 He has done his Masters in Economics, M Phil in Economic Planning from the University of Glasgow and doctorate on the topic of Project planningHe has been Secretary in the Ministry of Urban development of govt. of India for nearly 4 years, is well recognised for his outstanding contributions to rejuvenate India’s Urban sector both during his tenure as Secretary and after that also during the last 4 years since his views and advice are sought for both by government and private sector.

He was earlier Chief Secretary in the State of Uttarakhand, has steered the activities of some nine different city/area Development Authorities and four major Metro Rail corporations as Chairman

He is regularly invited to chair and guide various urban events in different parts of the country and he actively contributes to policy shaping in the country. He writes regularly in the Business Standard on various urban issues. His latest book India’s Urban Confusion: Challenges and strategies, published recently is a value addition to the on going urban debate.